Banish Onion Smell From Your Hands And Home With These Tips

Ah, aromatics. They bring out that rich, deep and seductive flavor in even the most boring of meals. There’s a reason (or many!) that garlic and onions are the cornerstone of so many wonderful dishes. But that potent and powerful goodness comes at a cost. Their scent will haunt you forever, from your cutting boards and countertops to your hair and fingertips.

We say absolutely, yes. After all, most good things come at a price. And if you have to go around with stinky onion fingers for a day or two after cooking last night’s glorious dinner, then so be it. But there’s got to be a better solution than just submitting to smelling like French onion soup or onion rings all week. And we’re certain soap and water won’t do the trick. We’ve all tried that. 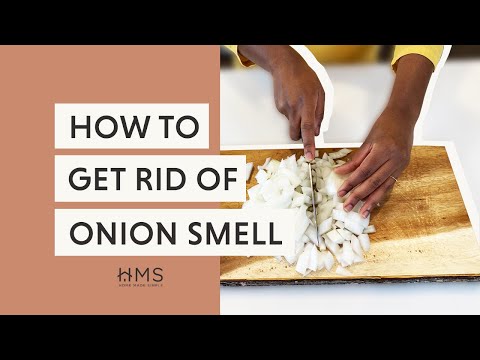 We’ve got some ideas on how to exorcise those onion demons from your home and also from your hands. Don’t worry, your home and hands will be smelling fresh again just in time for your guests to arrive. (And they’d best enjoy that onion dip!)

How to get onion smell off your hands

How to make your kitchen smell good

We know this sounds like an Onion headline, but you can actually use onions to absorb burnt or musty smells from your home. As counterintuitive as this seems, try cutting an onion in half and leaving it in a musty shoe closet or your stinky basement overnight. By the time the onion smell fades, the other smells will have vanished, too. Behold, the great smell swap!

It’s a universal truth that the mouthwatering scent of simmering onions beckons us all to the kitchen. We enjoy them in all forms: fried and dunked in condiments, atop burgers and sandwiches, blended into soups, pickled and creamed. Cooked and raw. Onions make the world go ’round.

But as much as they are delicious, their charm quickly wears off as they transform our homes, breath and body odor into stinky specters of themselves. Hey, it’s just the price of admission.

And now you don’t have to live with that burden. Be free to enjoy onions to the fullest with the knowledge that you can flip that kill switch when you’re ready to be done with them.

Wondering what to clean this summer? We’ve rounded up those summer chores you might have forgotten about in one easy checklist, plus tips to make the work easier.

A comprehensive and approachable checklist for fall cleaning your home, inside and out–plus helpful hints and product recommendations.

A room-by-room spring cleaning checklist that will have your home spotless. From scrubbing your bathroom to deep cleaning your kitchen, we’ve got you covered.

Ever wondered how often to do your household chores? Follow this handy checklist organized by day, week, month and season so you don’t miss a thing.

Easy Step-By-Step Guide on How To Clean A Grill

An easy-to-follow guide for how to clean your charcoal, gas, stainless steel, or cast-iron grill. Learn how to keep your grill in tip-top shape for summer barbecues.

How To Clean A Smelly Dishwasher In 5 Easy Steps

A step-by-step guide to ridding your dishwasher of weird smells (and preventing them from coming back) with a video tutorial, product recommendations, and helpful tips.

How To Clean A Microwave

An easy-to-follow guide to how to clean a microwave from inside out, with helpful tips and recommended products.

How To Clean Your Dishwasher Filter In 5 Easy Steps

Wondering how to clean your dishwasher filter? Follow these three steps to keep your dishes sparkling clean and funky smells at bay.